The Northern Lion looks pretty much like a “Peking Dog” (北京犬), with its whole body covered with long fur. The Northern Lion will normally perform in pairs with another person holding a ball for the pair of lion to chase after. Sometimes, to make things more exciting, two lion kids will join in to perform together with the two adult Lions. The pair of adult Northern Lions is made up of a female and a male. Initially their genders were differentiated by the color of the ribbon that is tied on the lions’ head. The female Northern Lion has a green colored ribbon tied on, while the male has a red colored ribbon. But currently, the gender of the northern lion can also be differentiated by the color of its fur on its head and its back, i.e. green for a female and red for a male.

The Northern Lion Dance projects a very active, happy, and playful movement. In their performance, they will joyously and actively chased after the ball, by leaping over tables, chairs, spinning themselves in 360 degrees stunt and rolling over one and another.

The Southern Cantonese lion style of dancing is very much focus on “The Horse Stance.” Initially, there were 2 schools of Southern Cantonese lion style of dancing. One being the Futsan (佛山) and the other is the Hoksan (鶴山). However, as time rolled on, the people became more and more creative and they combined certain styles of arts and crafts of Hoksan Lion Dance and Futsan Lion Dance together to form the Futthock style. This was created by the Singaporeans. Also, the Jow Ga (周家) style was formed in China. It uses the combinations of arts and crafts of Hoksan and Futsan.

In the history of the Southern Lion dance, the Futsan Lion was the first Lion to be created in China. It has a high forehead, curved lips and a very sharp horn on its head. Their dance movement are quite rough and their dancing routine involved in big movements. There are many schools teaching the Futsan Lion Dancing style compared to Hoksan.

The Hoksan Lion was created very much later after the existence of the Futsan Lion. It was created by Master Feng Geng, Chang (馮庚長) during the Ching Dynasty. Master Feng learnt his Lion Dance skills from his master, Le Xing, Feng (馮紹銜) who was a well known Chinese medication master and a student of the Shaolin martial school.

There are two different schools of teaching for the Hoksan Lion Dance. The most popular today is the Sar Ping School and many Lion Dance Associations around the globe are adopting the Sar Ping School of teaching. Some of the Teams that are adopting the Sar Ping school around the world are, the world champion, Kun Seng Keng (關聖宮龍獅團) from Malaysia, Khuan Loke (群樂龍獅團) from Malaysia, Tham Pui (譚沛圓龍獅團) from Hong Kong, Khuan Yee (群藝龍獅團) from Australia, Gee Yung (致勇國術龍獅團) from Hawaii  and many more from Indonesia, Brunei and The United States.

There is another Lion called the Zhou Jia Lion or popularly known as Jow Ga Lion in Cantonese. The Jow Ga Lion Dance Style was created by Jow Lung (周龍) and Jow Bui (周彪). Both of them have learnt the Futsan and the Hoksan lion dance style earlier. They were once a student of Master Geng Chang, Feng. However both of them did not complete their learning’s of the Hoksan Lion dance arts under the coaching of Master Feng before they branched out to form their own style of lion dancing. They used back the Futsan and The Hoksan Lion head, but improvised their own style of drum beats and the lion dance’s movements. Thus, they named their creations as Jow Ga, Futsan Lion and Jow Ga Hoksan Lion. The Jow Ga Lion Dance’s movements emphasized mainly on the Chinese martial arts stance and to be able to perform well in the Jow Ga lion dance, the participants must have a good martial arts background. 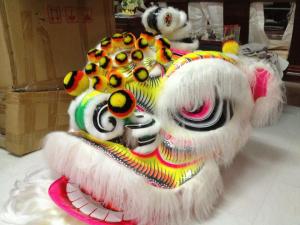